“I can’t believe this is happening – it’s like a dream”: 20 refugee and displaced persons receive new homes in Kakanj, Bosnia and Herzegovina

Kakanj, Bosnia and Herzegovina, 24 August 2020 – “This is a monumental day for all of us. After so many years and countless refugee camps, we have finally found permanent homes. In future, I will always remember two important milestones in my life: the first was the birth of my daughter, and the second is today. I can’t believe that this is happening – it’s like a dream.” These were the words of Mr Esad Ćerimović, speaking on behalf of the 20 refugee and displaced families that received keys to new Regional Housing Programme homes in Kakanj, Bosnia and Herzegovina (BiH), today. Prior to receiving his new apartment, Mr Ćerimović had spent 28 years in refugee camps in Han Pijesak, Žepa, Srebrenica, Tuzla and Zenica. 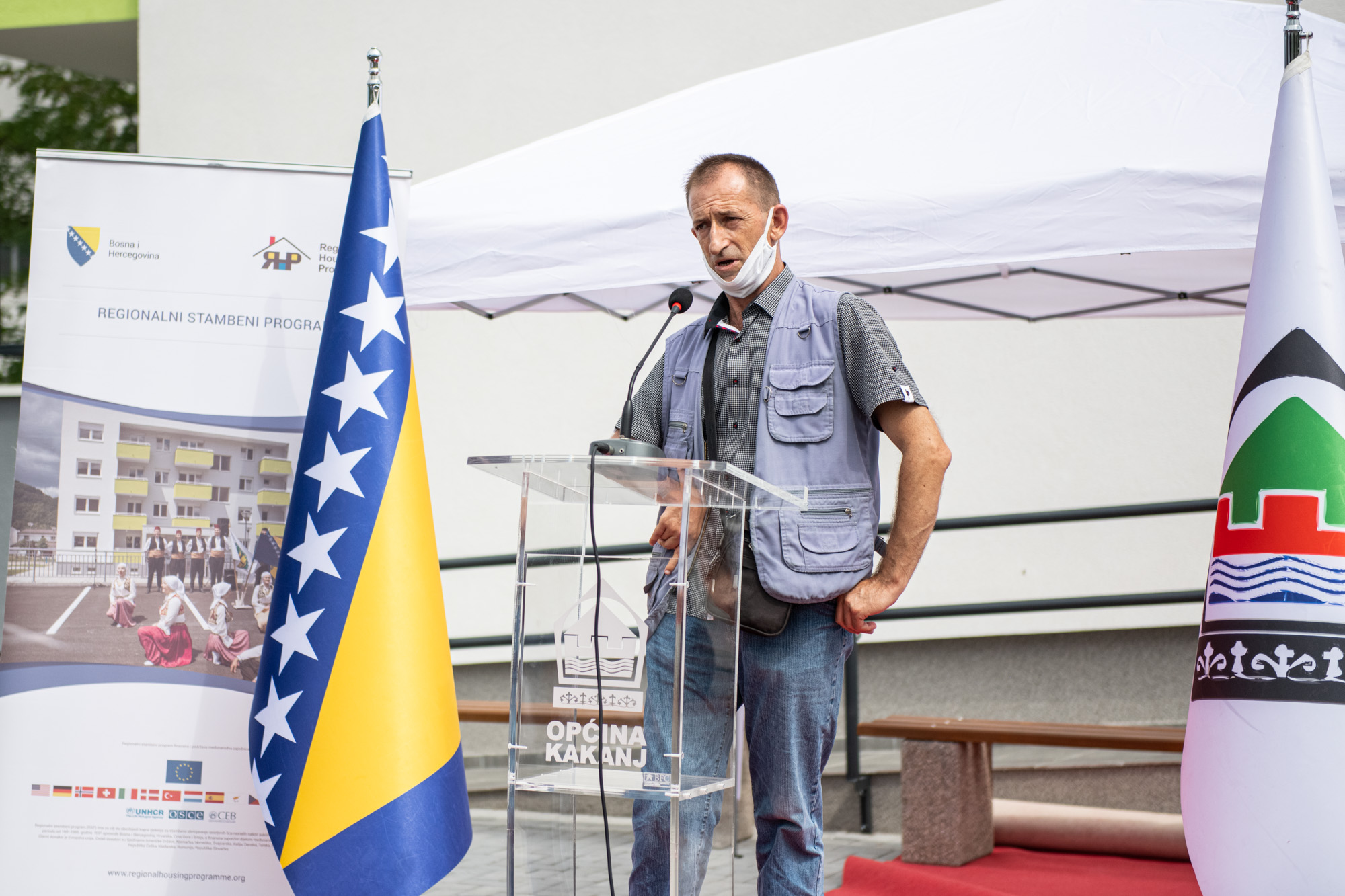 The total cost of the RHP apartment building in Kakanj, which was financed under the BiH3 sub-project, was approximately EUR 457 000. The main Donor to the RHP is the European Union, followed by other key Donors, namely the United States of America, Germany, Norway, Switzerland and Italy.

The delivery of keys ceremony was attended by Ambassador Johann Sattler, Head of the European Union Delegation to BiH and EU Special Representative in BiH; Mr Miloš Lučić, Minister for Human Rights and Refugees in BiH; Mr Edin Ramić, Minister of Displaced Persons and Refugees in the BiH Federation; Mr Aldin Šljivo, the Mayor of Kakanj, and Mr Dmitry Iordanidi, Deputy Head of the Organization for Security and Cooperation in Europe (OSCE) Mission in BiH, in addition to United Nations High Commissioner for Refugees (UNHCR) representatives and the beneficiaries themselves.

Delivering the keys to the beneficiaries on behalf of the EU, Ambassador Sattler reflected on the personal significance of the RHP. “The European Union participates in many projects and programmes in BiH, but the RHP is especially dear to me, because it is something very concrete,” he said. “Today, we will provide a roof over the heads of families who have been waiting for a long time. These apartments are intended for some of the most-vulnerable citizens of Bosnia and Herzegovina.” Echoing these words, Minister Lučić thanked all RHP Donors and partner organisations, and pledged that his ministry would continue its work with the RHP across the country, adding: “I wish these families all the happiness that they deserve.” 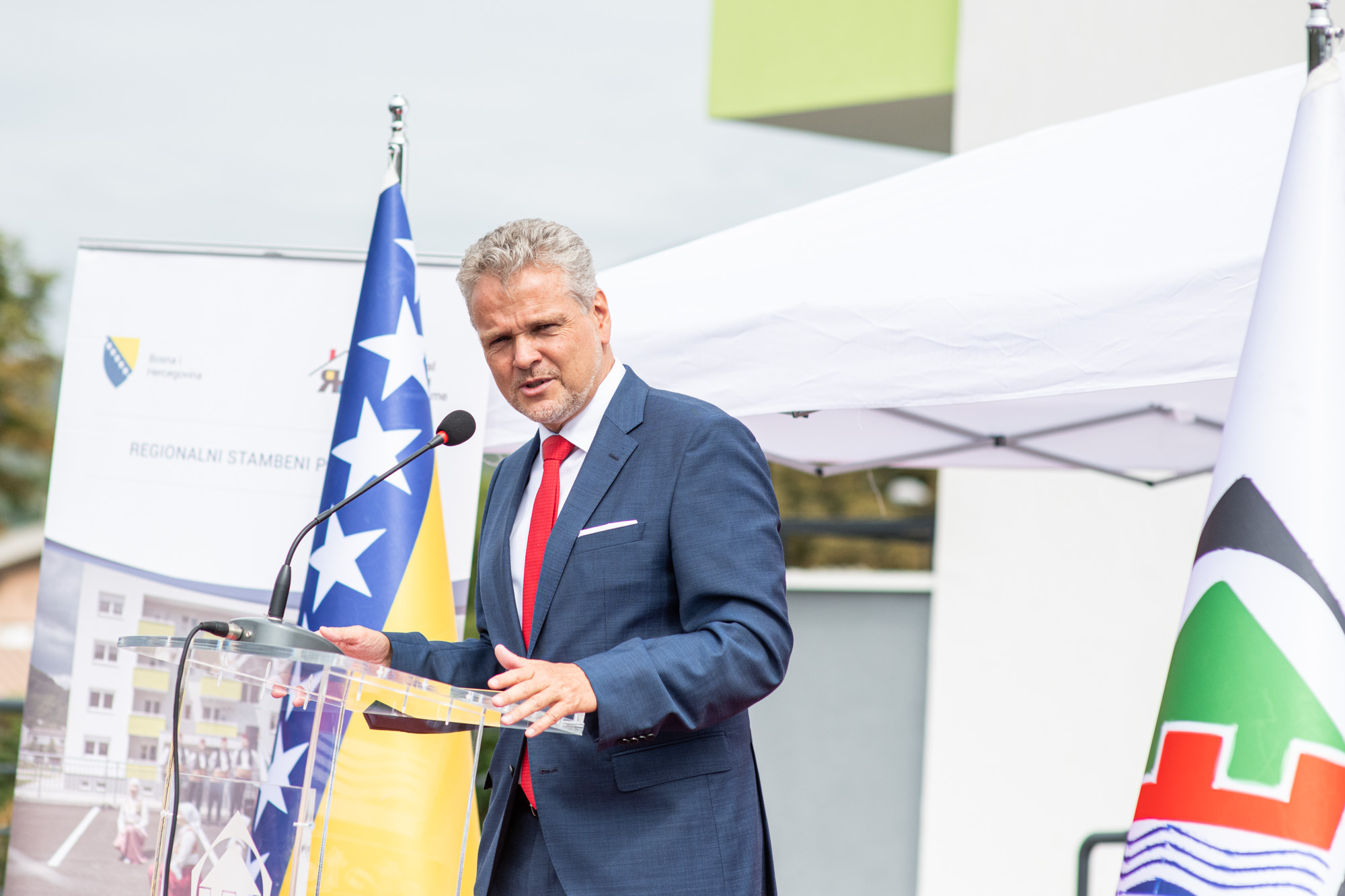 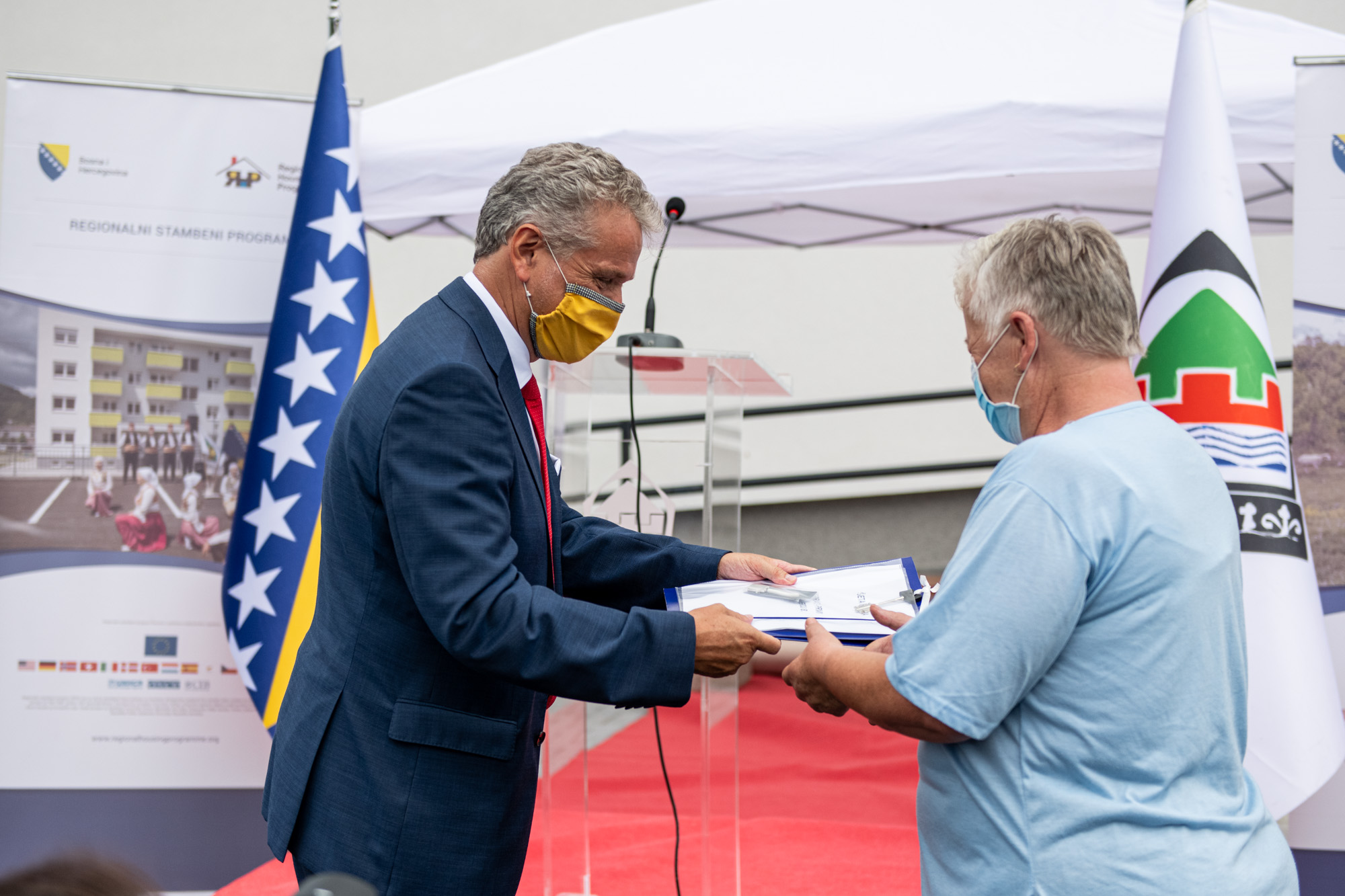 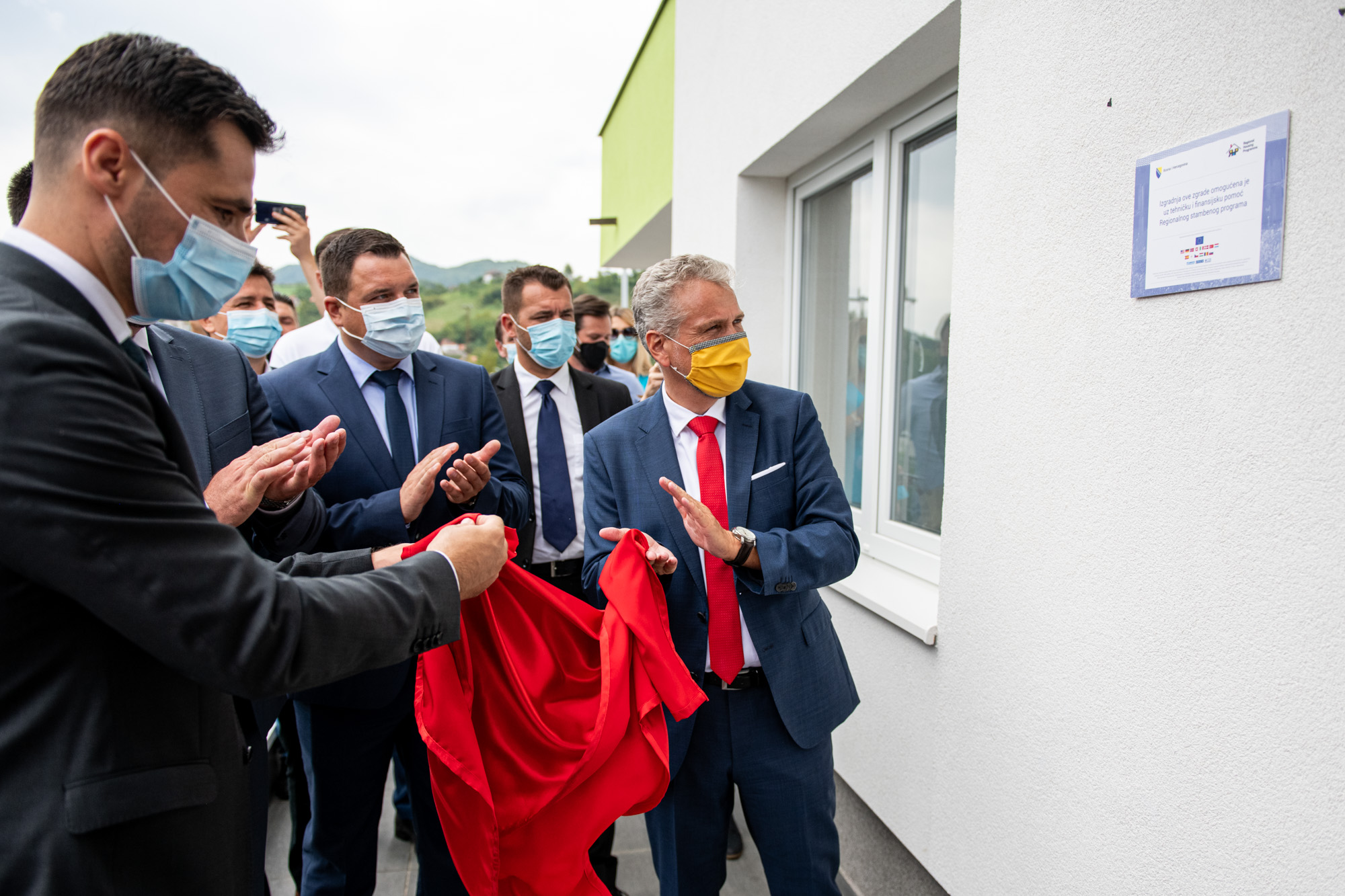 RHP stakeholders unveil the plaque on the new RHP building 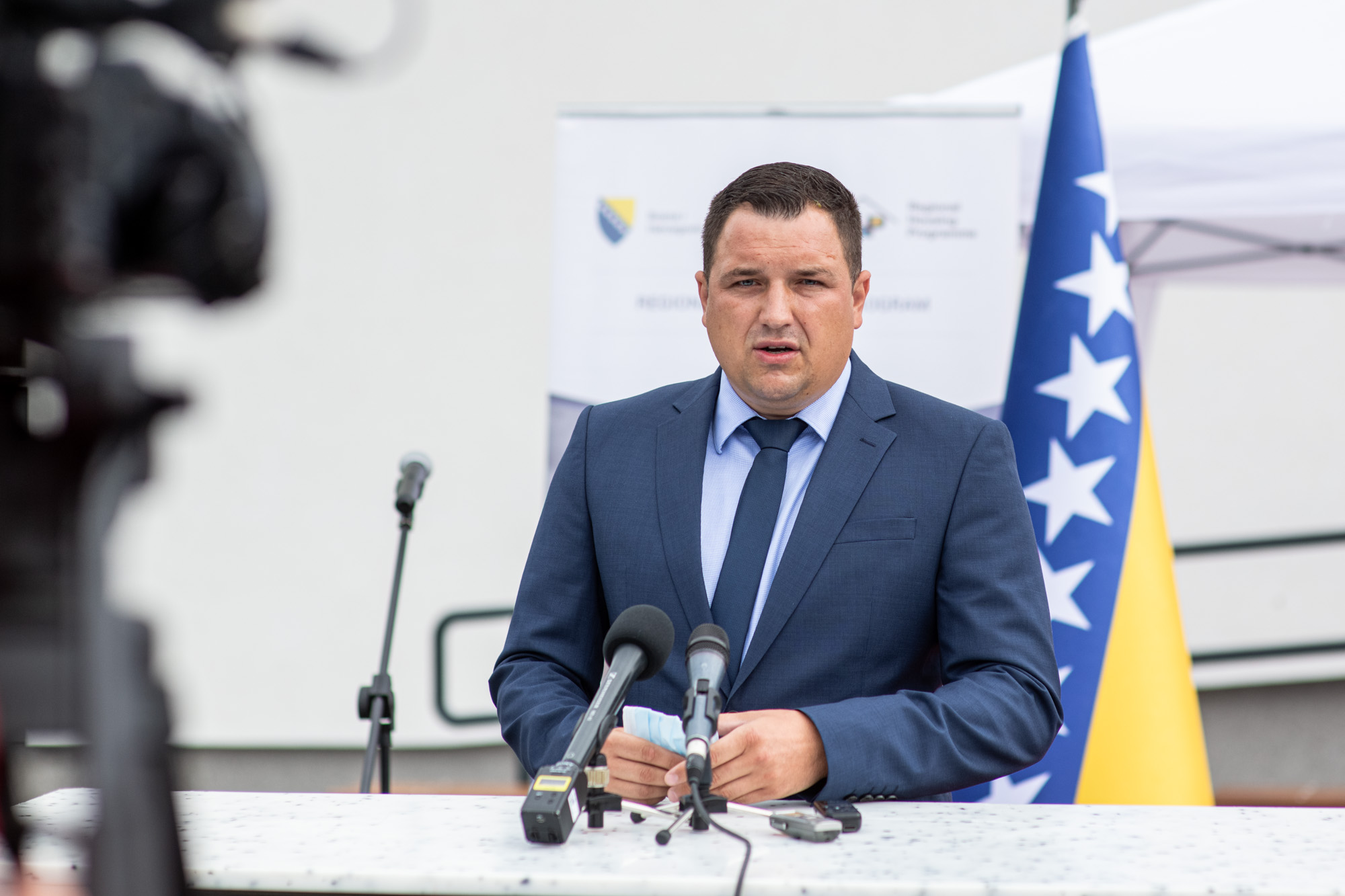 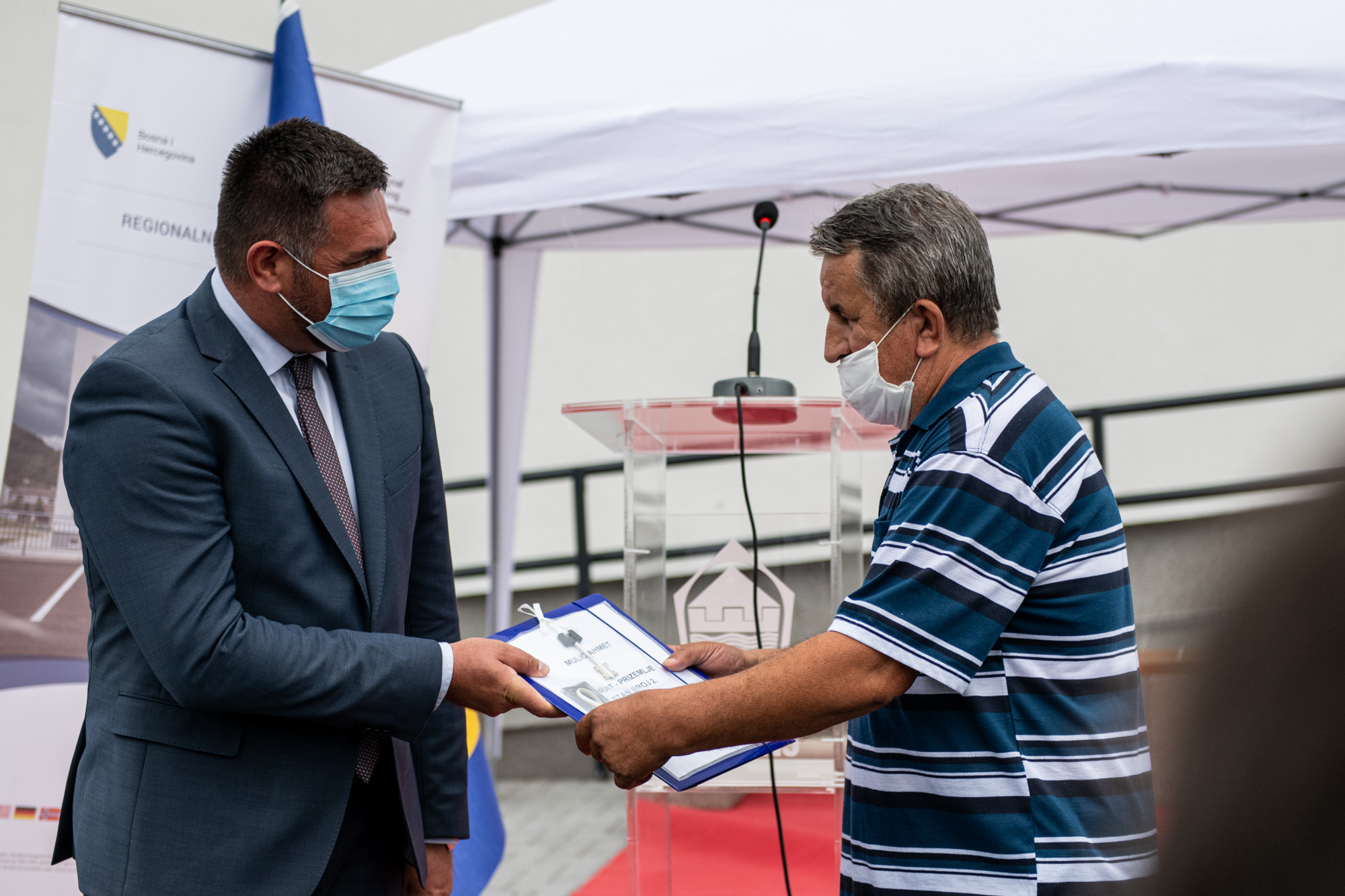 Minister Ramić congratulated the beneficiaries, noting with satisfaction that the project had required close cooperation between numerous stakeholders. “This project is the result of joint cooperation of all levels of government, and we are grateful to all of them,” he said. Mayor Šljivo agreed, adding “This is wonderful news for people in Kakanj.”

On behalf of the RHP partner organisations the OSCE and UNHCR, Mr Iordanidi stated that both organisations were glad to have assisted in the beneficiary selection process, and would continue to work closely with all partners to ensure the successful implementation of the RHP. “More broadly, we will also continue to assist the authorities to ensure that returnees and displaced persons have full access to their social and economic rights,” he said. “I wish the beneficiaries happy and prosperous lives here in Kakanj.” 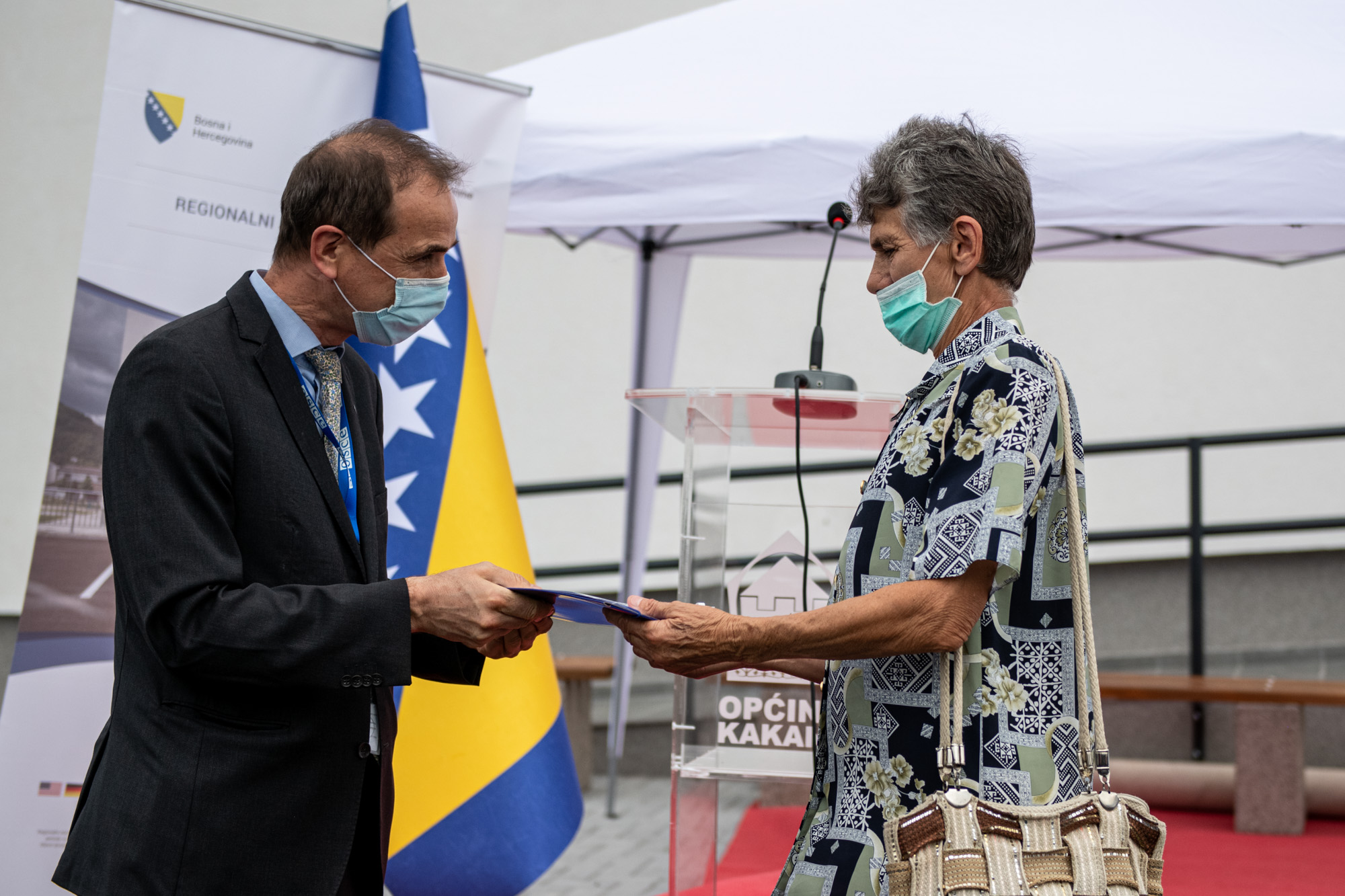 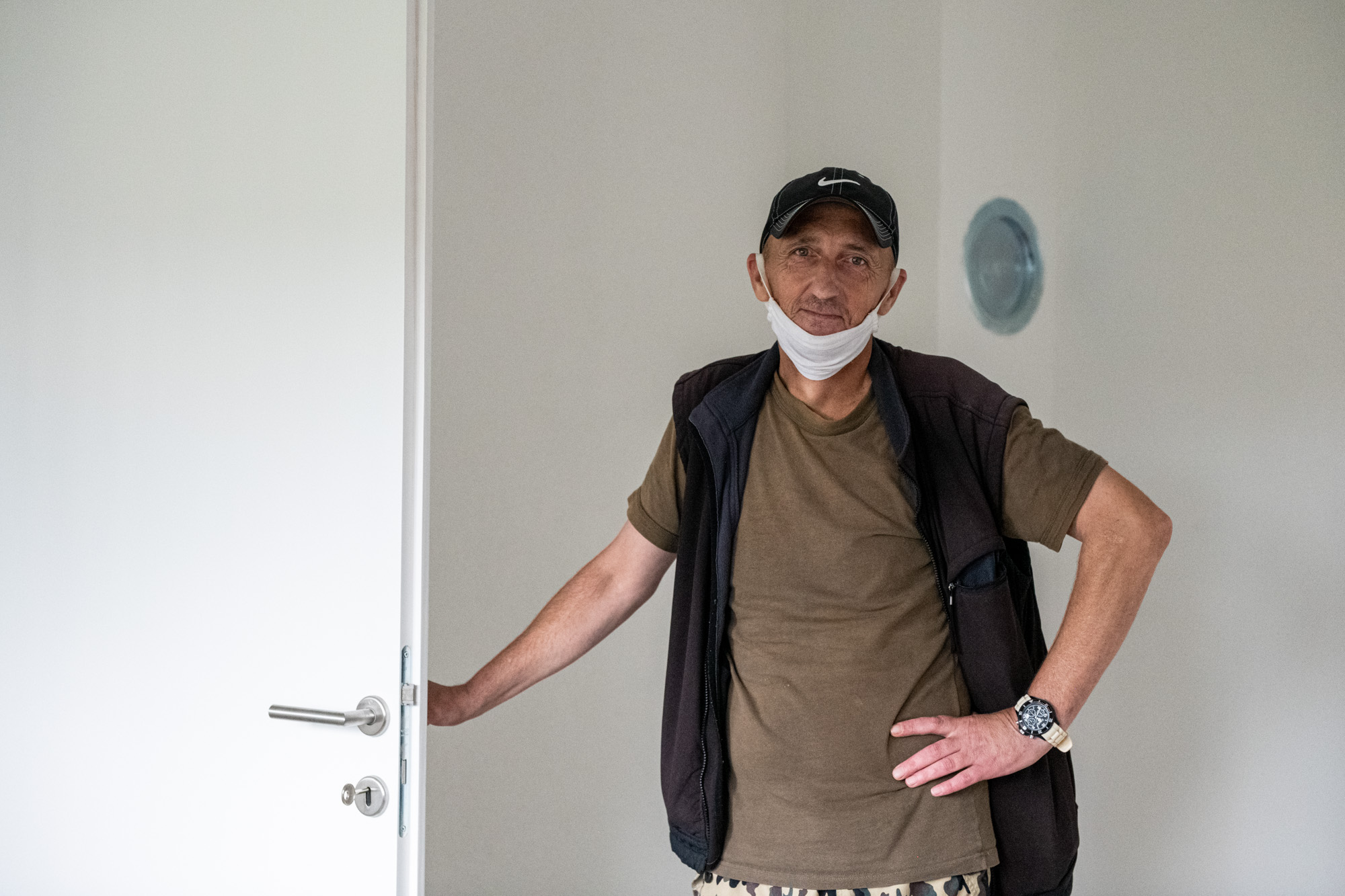 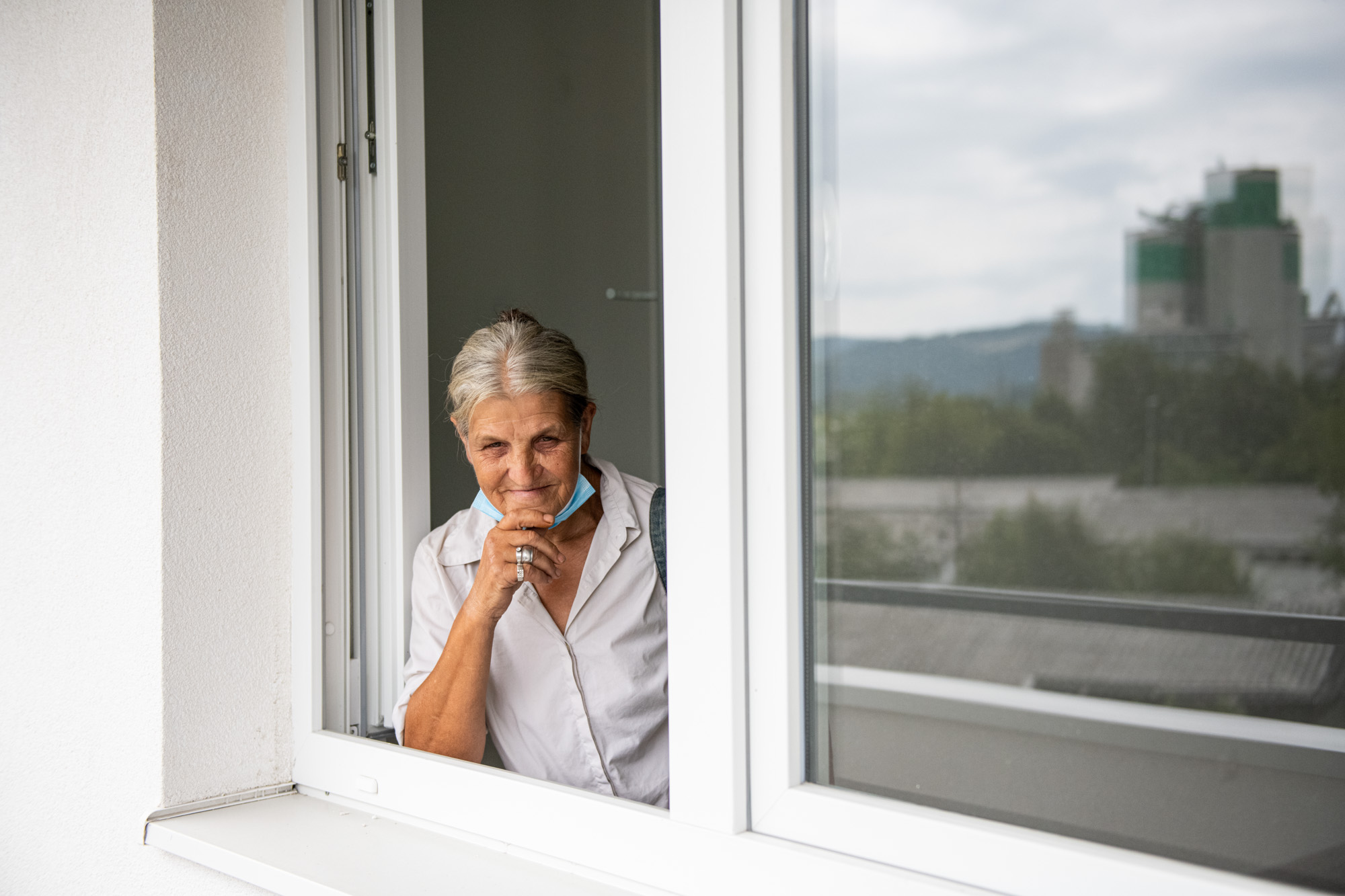 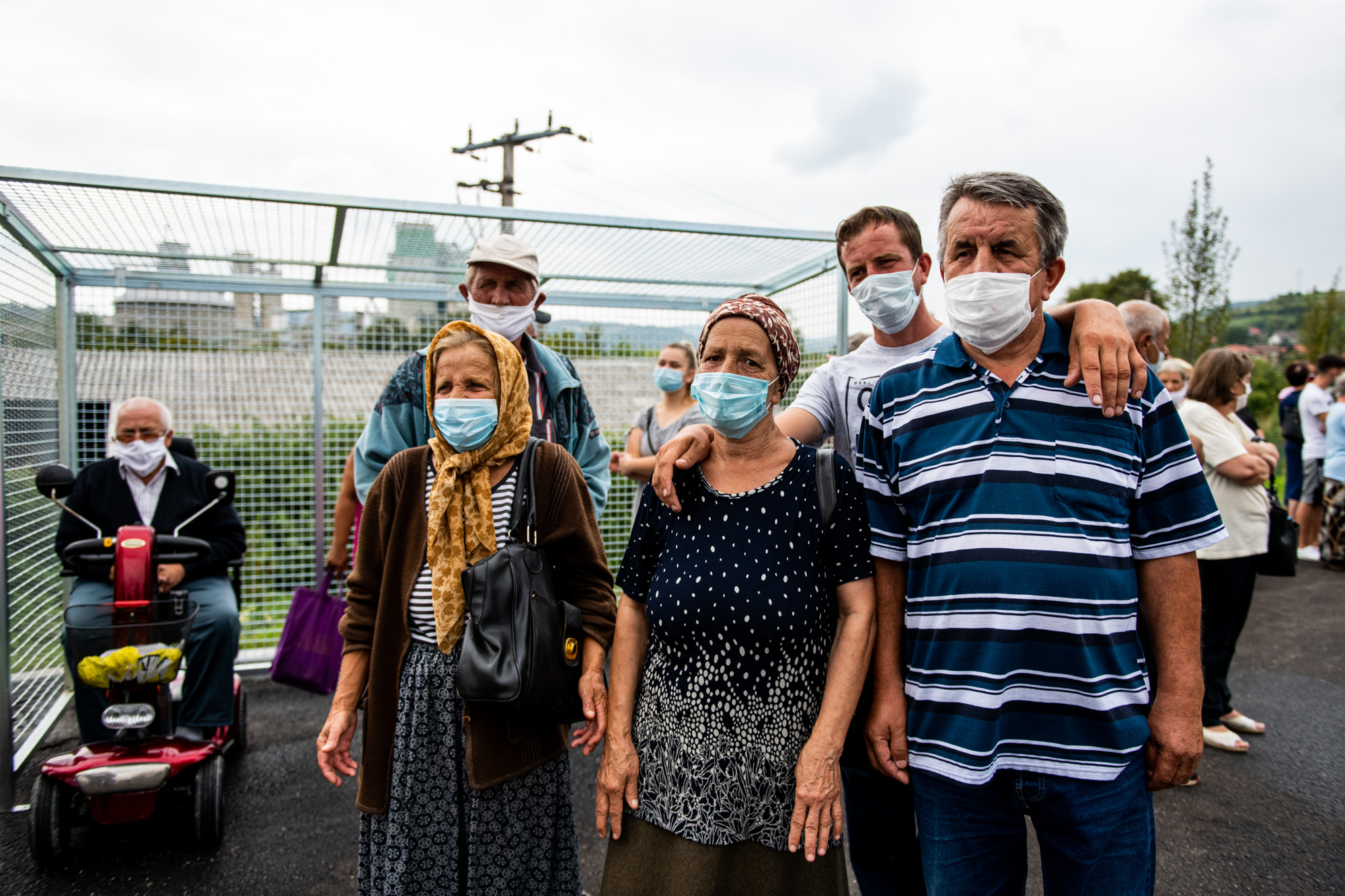 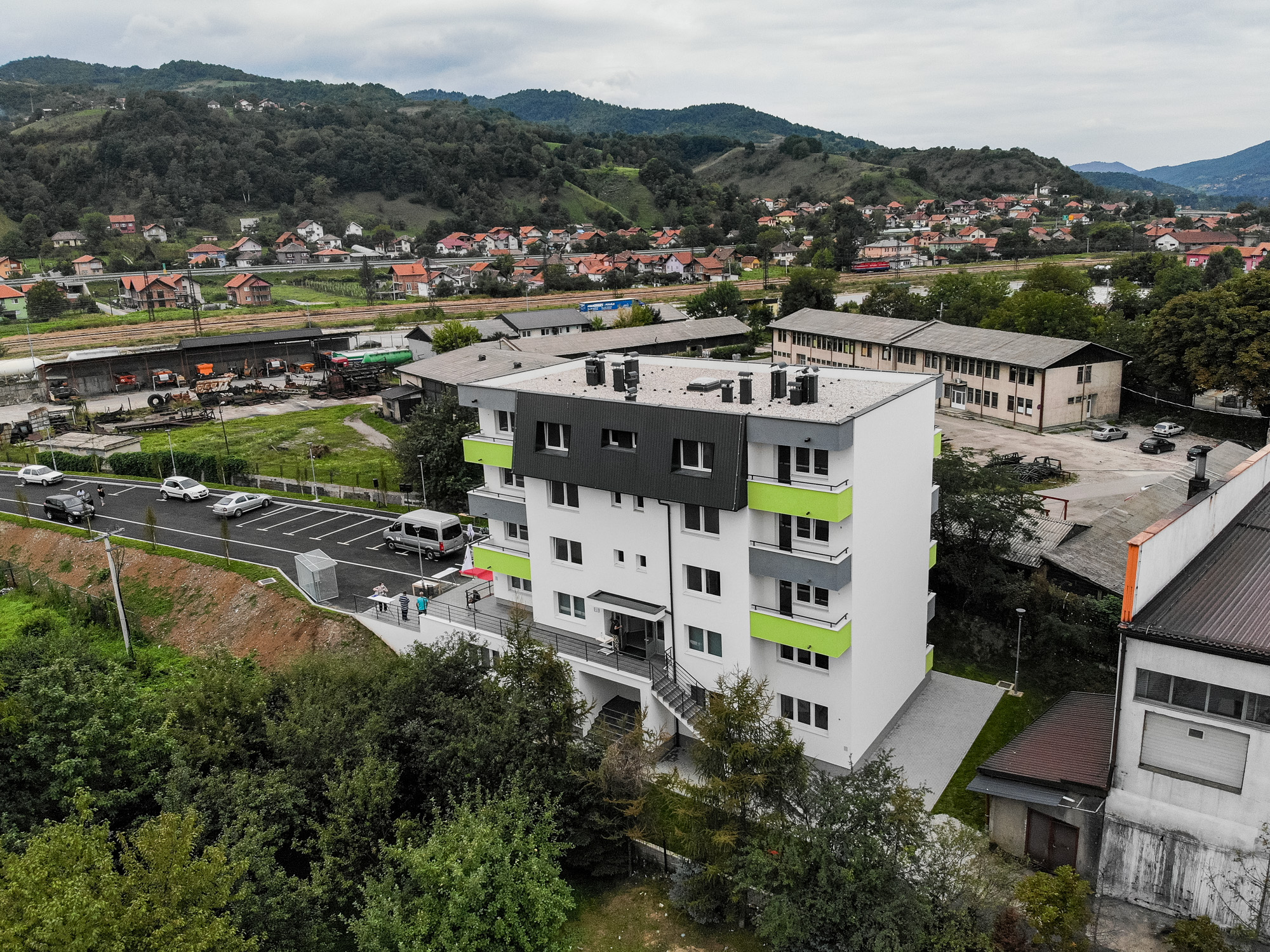