The Regional Housing Programme at the Paris Peace Forum

PARIS – On 11th to 13th November, the Council of Europe Development Bank (CEB) attended the Paris Peace Forum and presented the Regional Housing Programme (RHP) to a diverse audience originating from France and approximately 140 other countries. 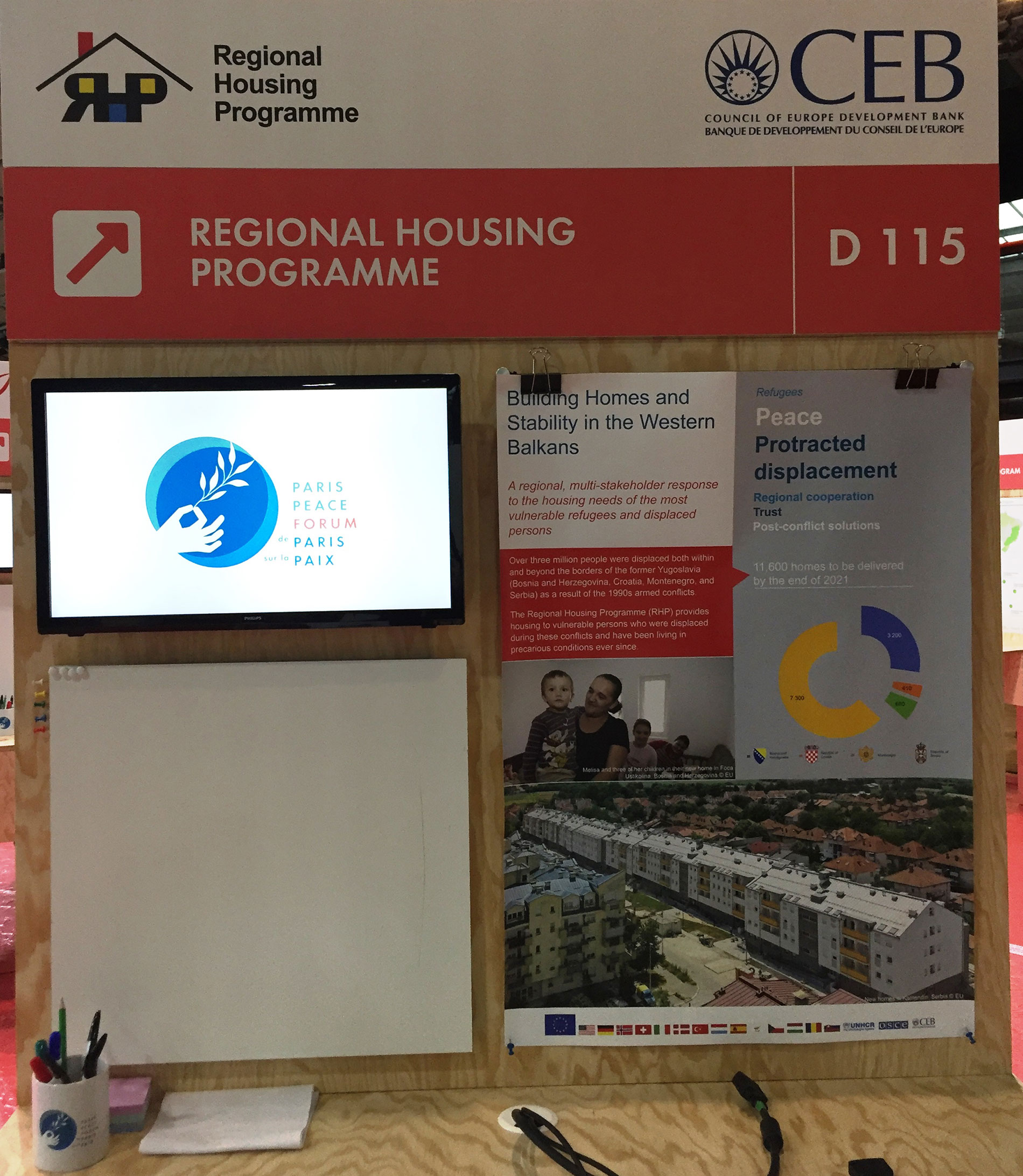 The Forum was opened by António Guterres, the Secretary-General of the United Nations (UN), French President Emmanuel Macron, and Ursula von der Leyen, the European Commission President-elect, amongst others. In their opening addresses, they emphasised the need for multilateral solutions to the current challenges to world peace, such as growing economic, technological and geostrategic fractures, climate change, growing inequalities and distrust in traditional institutions, terrorism, disinformation, and cybercrime.

The RHP was one of the 114 projects selected by the Paris Peace Forum out of about 700 applications from all over the world. It featured under ‘Development’ solutions and, alongside another EU-funded initiative dedicated to countering serious crimes in the Western Balkans, was the only project from the region that engaged with sustainable (post-) conflict solutions. The RHP team at the event was joined by representatives from the Organization for Security and Co-operation in Europe (OSCE), the United Nations High Commissioner for Refugees (UNHCR), and the Serbian Commissariat for Refugees and Migration (KIRS).

Stephan Sellen, Deputy Director of the Loans and Social Development Directorate of the Council of Europe Development Bank, introduced some of the RHP lessons learnt to date, such as the need to ensure the Partner Countries’ ownership of any solutions financed by international donors, and the obligation to build and apply a regional approach to regional issues, namely cooperation between the Governments of Bosnia and Herzegovina, Croatia, Montenegro and Serbia. 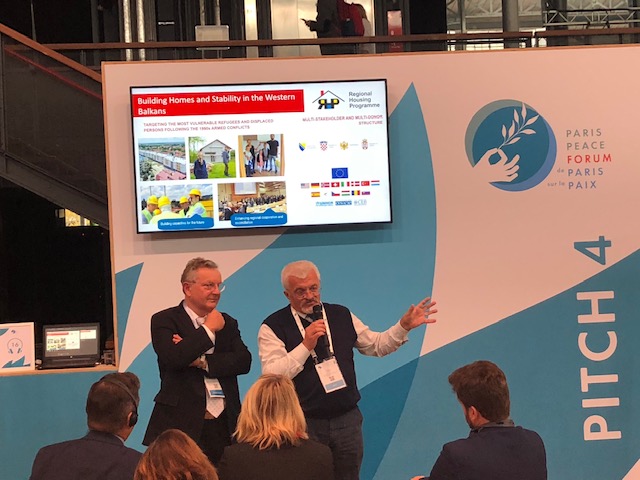 Vladimir Cucić, Commissioner for Refugees and Migration of the Republic of Serbia, briefly talked about the difficulties faced by the RHP partner countries when they started to cooperate in earnest after the war, and emphasised the fact that the biggest RHP achievement is to hear the families who have moved into their new homes say that the war is finally over. 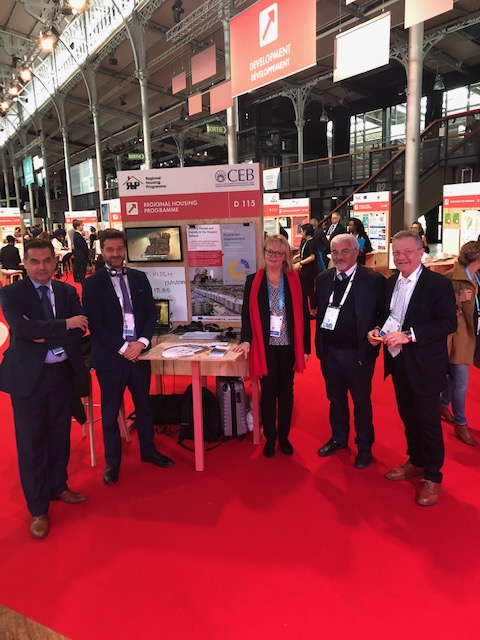 Mario Pavlovic, Regional Liaison Officer at the UNHCR Regional Representation for South Eastern Europe, highlighted the importance of adapting RHP solutions to the needs of the most-vulnerable people, and of ensuring a multilateral network of support in order that the durable solutions (including housing) offered are sustainable and help second- and third-generations leave behind the vulnerabilities inherent to being a refugee or an internally-displaced person. The UNHCR also reminded the Paris Peace Forum audience of the origins of the programme – the proclamation of the protracted refugee situation by the then High Commissioner Mr. António Guterres.

OSCE Secretary General Thomas Greminger maintained that ensuring decent housing for displaced persons and refugees is key for post-conflict rehabilitation, trust, and security, while Mark Fawcett, from the OSCE Secretariat’s Conflict Prevention Centre in Vienna, explained the role of the OSCE and the benefits that the RHP has had for regional co-operation and reconciliation.

Some 7 000 people attended the Forum, including formal delegations from 140 countries and 33 heads of state.

The CEB helps Partner Countries implement the RHP, manages donor contributions and coordinates all stakeholders. The United Nations High Commissioner for Refugees (UNHCR) and the Organization for Security and Co-operation in Europe (OSCE) are in charge of monitoring beneficiary selection and sustainability aspects of the RHP.  The Programme targets 11 300 vulnerable families in Bosnia and Herzegovina, Croatia, Montenegro, and Serbia. It is financed, for the most part, by the international community. Contributions pledged in favour of the Programme amount to € 287 million. The European Union, represented by the European Commission, is the largest donor, with € 234 million pledged, followed by the United States with € 24 million.