“A moment I will remember for as long as I live”: 24 RHP families receive keys to new homes in Vareš, Bosnia and Herzegovina, and Bor, Serbia

Vareš, Bosnia and Herzegovina, and Bor, Serbia, 18 November 2021 – The Regional Housing Programme (RHP) continues to make steady progress towards its objective of providing homes to approximately 11 800 most-vulnerable displaced and refugee families in the Western Balkans, as a further 24 families received keys to new homes in Vareš, Bosnia and Herzegovina (BiH) and Bor, Serbia, this week.

The main Donor to the RHP is the European Union, while other key Donors include the United States of America, Germany, Norway, Switzerland and Italy.

The first ceremony to take place was the delivery of keys to nine families in Vareš, BiH on 15 November. In addition to the beneficiaries themselves, the event was attended by Siroco Messerli, Head Of Division at the Swiss Agency for Development and Cooperation; Nina Mišković, Secretary of the Ministry for Human Rights and Refugees of BiH; Dmitry Iordanidi, Deputy Head of the OSCE Mission to Bosnia and Herzegovina; Azra Smječanin, RHP Project Manager at the Federal Ministry of Displaced Persons and Refugees; Ljubo Ninković, Acting Director of the Republic Secretariat for Refugees and Displaced Persons, and Zdravko Marošević, Mayor of Vareš, among others.

RHP beneficiary Josepka Pecirep and her son Tomislav were delighted to see their sunny new apartment after a decade spent living in a damp basement. “We can finally feel the warmth of the sun,” chuckled Josepka. “This is a moment that I will remember for as long as I live.”

Congratulating the families on their new homes, Mr. Messerli reflected with satisfaction on Switzerland’s involvement in the RHP. “We are very pleased to have played a role in enabling nine families to finally move into new apartments after many years of suffering,” he said.

These words were echoed by Mr. Iordanidi, who stated: “Today’s ceremony represents the symbolic end of the long-term displacement of these families, and the beginning of a new chapter in their lives. We are pleased to have been a part of this story, and will continue to work closely with all our partners to ensure the continued implementation of the RHP.”

The following day, it was the turn of 15 RHP families in Bor, Serbia to celebrate the receipt of long-awaited homes. This event was attended by Nicola Bertolini, Head of Cooperation at the Delegation of the European Union to Serbia; Vladimir Cucić, Commissioner for Refugees and Migration of the Republic of Serbia; Aleksandar Milikić, Mayor of Bor; Stefanie Krause, Senior Durable Solutions Officer at the UNHCR Representative in Serbia; and Dušan Kovačević, Director of the Public Sector Projects Implementation Unit Ltd., as well as representatives of other international organizations and institutions. 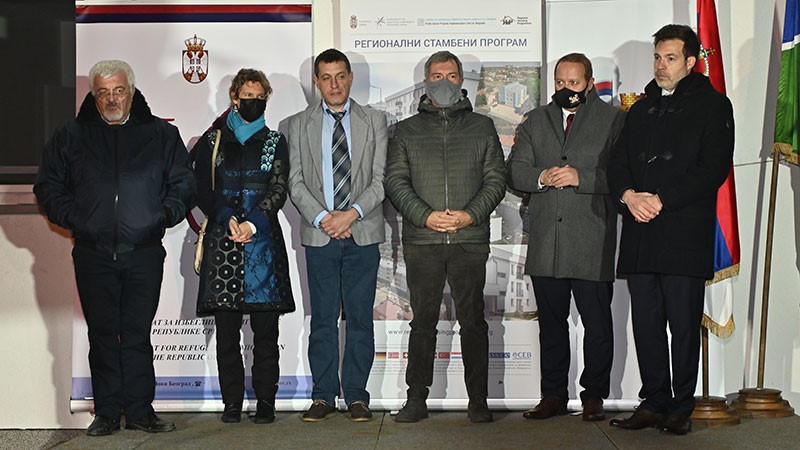 Delivering the keys to the beneficiaries, Mr. Bertolini stated: “I am extremely happy that you have finally found a home. I also thank the City of Bor for participating in this project.”

RHP beneficiary Gordana Miletić from Prebilovac, BiH, who had fled to Serbia with her parents at the age of 20, took a moment to thank all RHP stakeholders. “On behalf of the 15 families gathered here today, I would like to thank all of you for providing us with a roof over our heads,” she said. “I arrived in Serbia in 1991, and  raised my family here. Now, we have our own home at long last.”