“I always dreamed of returning home, because Herzegovina is my California!”

Davorin Savić begins his story in front of his newly-built RHP house in the village of Bačevići, near Mostar, in Bosnia and Herzegovina (BiH). The memories of leaving his family home with his brother and mother in 1992, to flee to Belgrade, Serbia, are still fresh. “It was difficult to live as refugees,” he recalls. “But we managed to survive somehow. We were tenants, and I mostly worked at the local market.”

In 2010, the family finally returned to Bačevići, where they were distraught to find that their home had been completely demolished. But their luck was about to change. “We met some neighbors who told us about a programme that re/constructed houses for returnees,” Davorin says. “We quickly submitted an application to the Regional Housing Programme.”

Davorin admits that life in BiH is not easy, especially for returnees and displaced persons. While he had worked in the power industry before the war, he was unable to find a job in this sector on his return to BiH. And he still does not have a job with a secure salary, or health insurance. “I would strongly appeal to the authorities to introduce concrete employment programmes and economic support for returnees, particularly during the difficult period of this pandemic,“ he remarks.

Nevertheless, despite the odds, Davorin manages to ensure a dignified life for himself, his mother and the family of his brother, who passed away last year. This is in large part thanks to the funds ensured by the U.S. Government and assistance of the Catholic Relief Service, which provided the family with a greenhouse and rotary cultivator. “I never imagined that I would produce vegetables in a greenhouse and cultivate land,” he laughs. “But it’s great. I sell my products at the market in Mostar.”

As an example, Davorin proudly presents his prized crop, the largest Herzegovinian pomegranate, “Glavaš”. “Every house in our village and throughout Herzegovina has these huge pomegranates,” he grins. “I would actually like it to become our specialty, because our pomegranate is unique – it is the biggest, and is frankly the miracle of Herzegovina.”

Reflecting on his life today, Davorin is also quick to point out the friendliness of his neighbors of different nationalities. “We live together, help each other and celebrate all holidays,“ he points out.

“While we were refugees, I always dreamed of returning, because this is my California.” 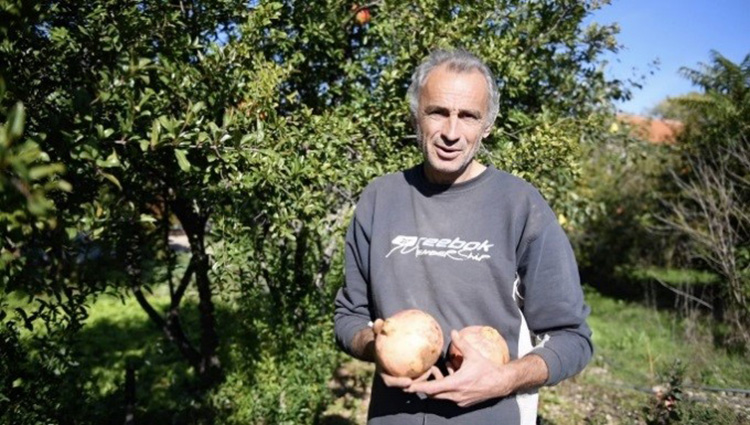