Mionica, Serbia, 3 January 2020 – At the first Regional Housing Programme (RHP) event of 2020, on 3 January, keys to 16 new apartments in Mionica, Serbia, were handed to refugee families from the former Yugoslavia. The apartments were constructed under RHP sub-project SRB5, which has a total value of € 52 million.

Addressing the beneficiaries, Ivica Dacic said: “The fact that we assign keys to 16 apartments for refugees from the territory of the former Yugoslavia in Mionica will further enrich this festive period. I am particularly pleased that some of you will celebrate Christmas and the Serbian New Year in new homes.” 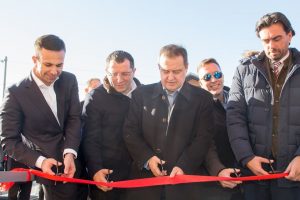 Steffen Hudolin, Head of Operations Sector II at the European Union Delegation to Serbia, agreed, emphasising once again the strong commitment of the EU to working with Serbia to provide permanent housing solutions to the remaining beneficiaries of the RHP. “We are proud to be the largest donor to the Regional Housing Programme, and intend to continue our support until its completion,” he said.