To raise funds for the RHP, an international Donors’ Conference was held in Sarajevo on 24 April 2012. During this conference, the European Union, the United States of America, Germany, Norway, Italy, Switzerland, Denmark, Türkiye, Luxembourg, Cyprus, Romania, the Slovak Republic, the Czech Republic, Hungary and the former United Nations High Commissioner for Refugees, Ms Sadako Ogata, pledged EUR 261 million in support of the RHP. Subsequent contributions by the European Union, the United States, Germany, Norway, Switzerland, Spain and the Czech Republic brought the total of funds committed to the RHP to EUR 294 million. Of this amount, EUR 247 million was committed to the RHP Fund. 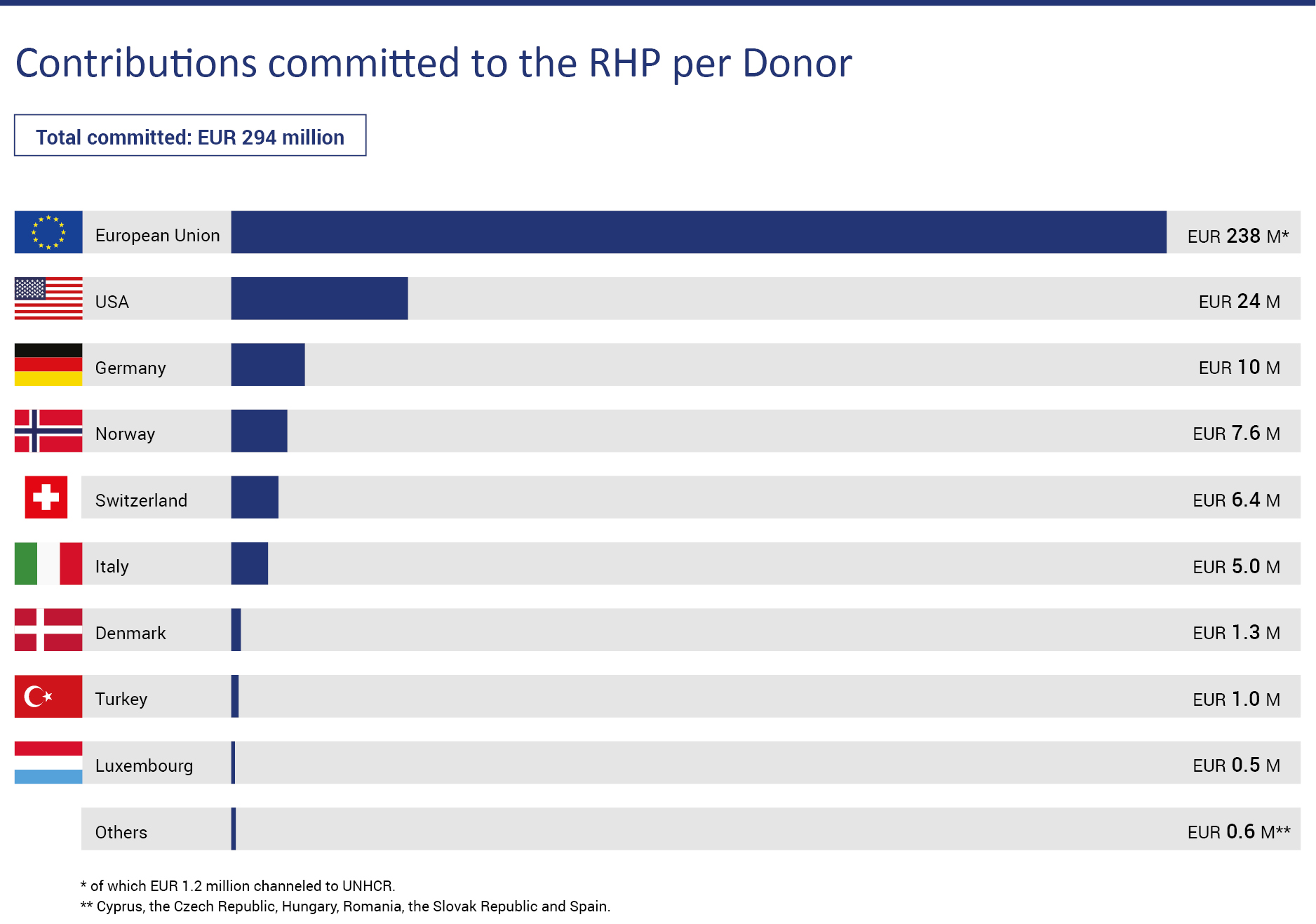 In addition to the EUR 193 million committed to the RHP Fund and the approximately EUR 1 million channelled to UNHCR, the European Commission has made a bilateral contribution of EUR 43 million to cover technical assistance for the RHP Partner Countries and part of their operating costs, as well as the CEB's programme management costs. 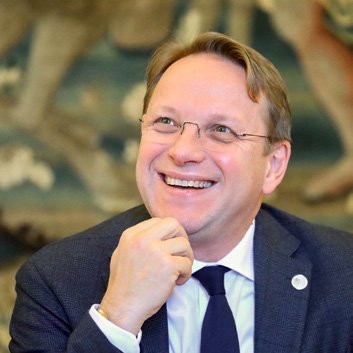 We created the Regional Housing Programme to help the people who lost their homes in the armed conflicts in the former Yugoslavia in the 1990s. The Programme is a symbol of peace and reconciliation in the Western Balkans, and a symbol of solidarity of the European Union towards the region.

30 years after the bloody breakup of Yugoslavia, with the Russian invasion of Ukraine the war returned to Europe. Once again, we are witnessing extreme human suffering, with thousands of lives lost and millions fleeing. The EU is doing all it can to end the conflict and help all those in need.

The impact of this new war will be tough for all of us, especially since we are still recovering from the global COVID-19 pandemic. In these circumstances, we need to stand in unity and determination. Together we can overcome all the challenges.

We have started implementing the EUR 30 billion Economic and Investment Plan for the Western Balkans that will transform the region and create strong connectivity within and towards the EU. It will boost growth and jobs and strengthen the region’s resilience. 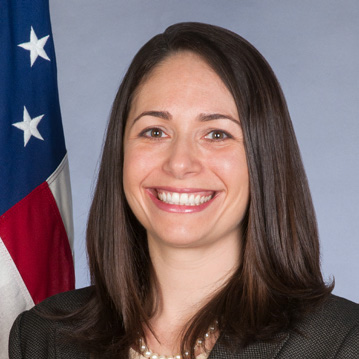 I applaud Bosnia and Herzegovina, Croatia, Montenegro, Serbia, the CEB, OSCE, UNHCR, and the Donors for the successful efforts this past year towards the Regional Housing Programme’s (RHP) ultimate goal of providing 11 700 homes to vulnerable families. While this was a challenging year for the RHP navigating the ongoing COVID-19 pandemic, the Partner Countries demonstrated an impressive commitment to this Programme by working toward this goal and pressing on with the construction of much needed housing.

As the RHP enters its final full year of operation, the United States encourages the continued cooperation between all members of the RHP to successfully and effectively accomplish the objectives of this mission. It is my hope that humanitarian policy makers, development banks, and humanitarian and development organisations study these successes and use the RHP as a model to help displaced communities throughout the world.

2021 was a very successful, but still challenging, year for the RHP. In spite of the continuing negative effects of the COVID-19 pandemic, Partner Countries managed to significantly speed up the implementation of the housing Programme. Thanks to the completion of more than 1 000 new durable homes, many more most-vulnerable refugees and displaced persons as well as internally displaced persons (IDPs) were able to considerably improve their living standards. In addition, the RHP further strengthened intra-regional cooperation, and thus contributed to further overcoming the consequences of the wars of the ’90s in the Western Balkans.

As the RHP has entered its close-out phase, Partner Countries and Donors are now called upon to intensify their efforts in order to ensure the timely implementation of all close-out activities and the overall completion of the Programme as planned. As in 2021, Germany will continue to fully support the RHP and Partner Countries in this process. 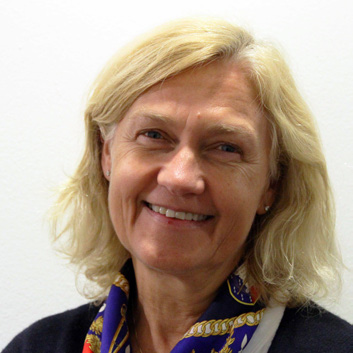 Norway has been actively engaged in the Regional Housing Programme since its inception in 2012. Contributing to resolving the displacement situation of vulnerable refugees and displaced persons from the conflicts in the early 1990s remains key. Hence, the RHP is important for Norway and for its cooperation with the countries of the Western Balkans.

The Programme had delivered more than 8 800 housing units by end-2021. Despite the constraints of the COVID-19 pandemic, we have seen a will and a capacity to continue the work in a challenging situation.

Norway will stay committed. The Partner Countries' continued efforts, as well as the contributions of the UNHCR, OSCE and CEB, are key in the final phase and for the successful completion of the Programme. 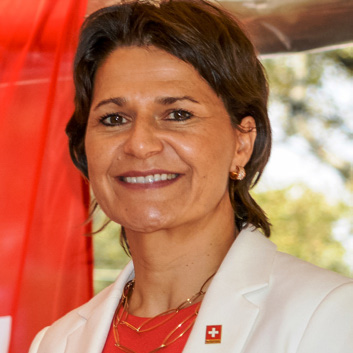 I would like to commend the Partner Countries, the Council of Europe Development Bank, the UNHCR, the OSCE and Donors for their joint efforts to deliver 1 021 homes to more than 3 000 persons in 2021 despite the challenges faced by the global pandemic. I would like to highlight that the RHP is not only delivering durable housing solutions to people, it also fosters regional collaboration between the Western Balkan nations earlier facing conflict. Switzerland also supports the countries of the region through its various multilateral engagements as well as its longstanding bilateral cooperation programmes.

With only eighteen months left to complete all activities, I am calling upon Partner Countries and Donors to increase their efforts to reach the target of 35 000 beneficiaries. As the Co-chair of the RHP in 2022, Switzerland is very pleased to support the RHP and Partner Countries to bring a decade of joint efforts to a successful closure.

One of the key features of the RHP is that it is implemented by the Partner Countries themselves, enabling them to build capacities for future housing projects. To help them implement the Programme according to best practice, they benefit from implementation support such as technical assistance.

This implementation support is financed mainly by the EU. In addition to the EUR 193 million committed to financing housing projects and the approximately EUR 1 million channelled to UNHCR, the European Commission has made a bilateral contribution of EUR 43 million to finance such implementation support measures. Other Donor countries also committed further funds to that purpose: Germany EUR 1 million, Norway EUR 0.6 million, Switzerland EUR 0.5 million, and Spain increased its previous contribution to a total of EUR 0.3 million.

In addition, several Donor countries are supporting RHP governance and visibility activities. These Donors are Cyprus, the Czech Republic, Hungary, Romania and the Slovak Republic. Altogether, they have provided EUR 0.3 million.