On 28 February 2017, the Commissariat for Refugees and Migration of Serbia (KIRS) and the Council of Europe Development Bank organised a press conference in Novi Sad, with the aim to present the latest results of the Regional Housing Programme. The press conference was organized in the context of KIRS’ annual trustees’ meeting, this year dedicated to the RHP implementation in Serbia.

7 900 vulnerable families should have received new homes by 2019 if the current implementation pace continues, said Marja Seppala, Head of the Secretariat of the Regional Housing Programme, Council of Europe Development Bank. Ms Seppala added that RHP Donors have pledged to date EUR 269 million, of which EUR 230 million is from the European Union.

Vladimir Cucic, Commissioner for Refugees and Migration, stated that Serbia is the biggest beneficiary of the RHP with six projects approved so far with the overall value of EUR 104 million, out of which EUR 87 million will be financed from the RHP Fund and EUR 17 million through the national contribution. These projects should provide over 5 200 housing solutions, improving significantly the living conditions of some 15 000 vulnerable persons.

“If we continue with the successful implementation of this Programme, the EU intends to commit an additional EUR 20 million for Serbia in 2017,” stated the Head of Sector of the EU Delegation to Serbia Nicolas Bizel, representing the EU as the main Donor to the RHP Fund. 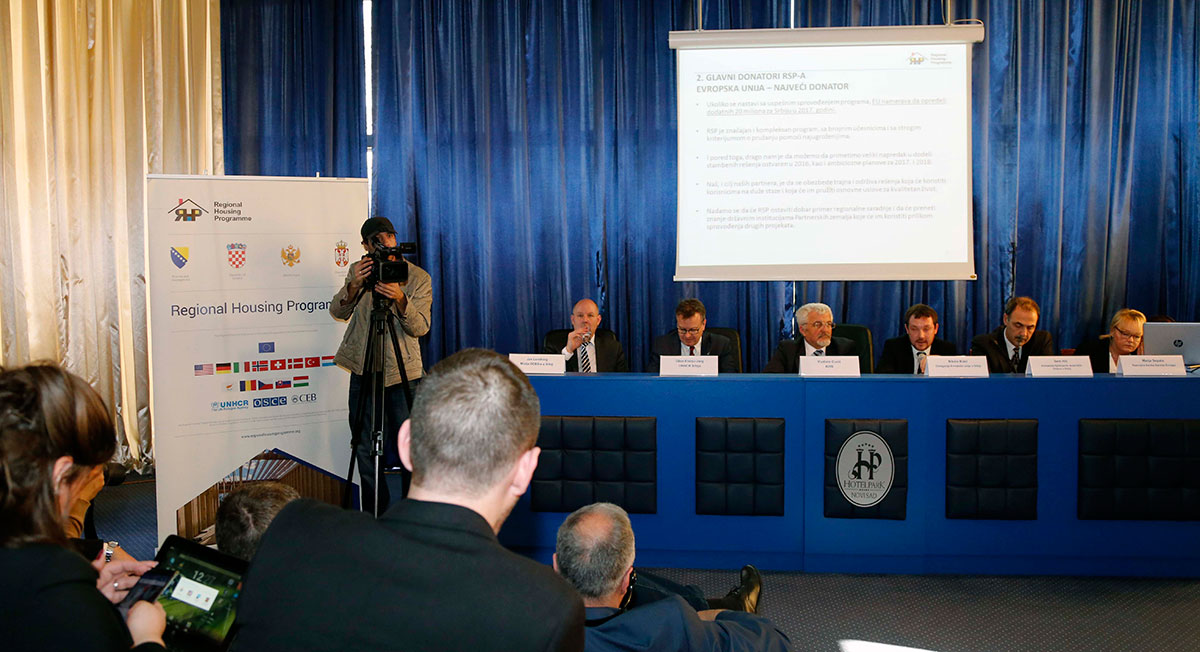 “Last summer, I visited two refugee families in Stara Pazova and Novi Banovci. One family received a prefabricated house, and the other received assistance in building materials. They appreciate the sup-port they received, and now they can finally raise their children, peacefully in their own homes. By providing them with permanent housing, the vulnerable are provided with the basic conditions for pro-gress. We hope that the efforts the EU is making in cooperation with our partners will also give a good example of building stronger regional cooperation. We will continue to support this programme, we have to work harder on its implementation, to be faster, to have good projects and to work together”, stressed Bizel.

Sam Healy, U.S. Regional Coordinator, Populations, Refugees and Migration, U.S. Embassy Belgrade, said that RHP is an integral part of U.S. Government’s efforts to help people displaced by the wars in the Balkans: “We hope that the relationships built and the collaborative efforts undertaken will continue to provide a model and basis for future collaboration between the countries in the region”. The US is the second largest Donor to the RHP Fund with EUR 15 million.

John Andrew Young, Senior Protection Officer, UNHCR Serbia and Jan Lueneburg, Head of Democrati-sation Department, OSCE Mission to Serbia underlined the added value of this joint programme, such as regional cooperation, strengthening of administrative capacities and cooperation with local self-governments. Both organisations’ representatives stressed that they remain firmly committed to the efforts aimed at providing housing solutions for the most vulnerable and ensuring their sustainability.

The representatives of the three other Partner Countries Bosnia and Herzegovina, Croatia and Monte-negro, also addressed the media. Deputy Minister of the Ministry for Human Rights and Refugees of Bosnia and Herzegovina Predrag Jovic concluded by emphasising how RHP demonstrates that the four countries can work together to reach the common goal.