“The difficult years are finally behind us”: 75 RHP families receive new homes in Niš, Serbia

Niš, Serbia, 2 August 2021 – A further 75 most-vulnerable refugee and displaced families were handed the keys to new homes in Niš, Serbia, today, courtesy of the Regional Housing Programme (RHP). The ceremony took place in the aftermath of another Programme event in Serbia on 30 July, to mark the delivery of contracts for construction materials for 40 refugee and displaced families in the city of Sombor.

In addition to the beneficiaries themselves, the delivery of keys event was attended by Nikola Selaković, the Serbian Minister of Foreign Affairs; Dragana Sotirovski, the Mayor of Niš; Gerhard Salzer, Programme Manager at the Delegation of the European Union to Serbia; Stefan Almehagen Sandstad, First Secretary at the Norwegian Embassy in Serbia; Ružica Banda, National Human Rights Officer at the Organization for Security and Cooperation in Europe (OSCE) Mission to Serbia; Vladimir Cucić, the Serbian Commissioner for Refugees and Migration, and Dušan Kovačević, Head of the Public Sector Projects Implementation Unit (PIU) Ltd., among others.

Delivering the keys to the beneficiaries, Minister Selaković wished them happiness in their new homes. “I hope that many of you will raise your families in these apartments, and that you all will enjoy a calm and peaceful old age here, together with your children and grandchildren,” he said. He warmly thanked all RHP stakeholders, namely the European Union, the main Donor to the Programme, but also the other key Donors, Programme Partners – the Council of Europe Development Bank (CEB) in particular – the Serbian Commissariat for Refugees and Displaced Persons (KIRS), and the City of Niš, and reaffirmed the commitment of the Government of the Republic of Serbia to providing homes to all those in need. These words were echoed by Mayor Sotirovski, who also wished the beneficiaries the best of luck, and assured them that the City of Niš would be ready to provide assistance once they had moved into their new homes. 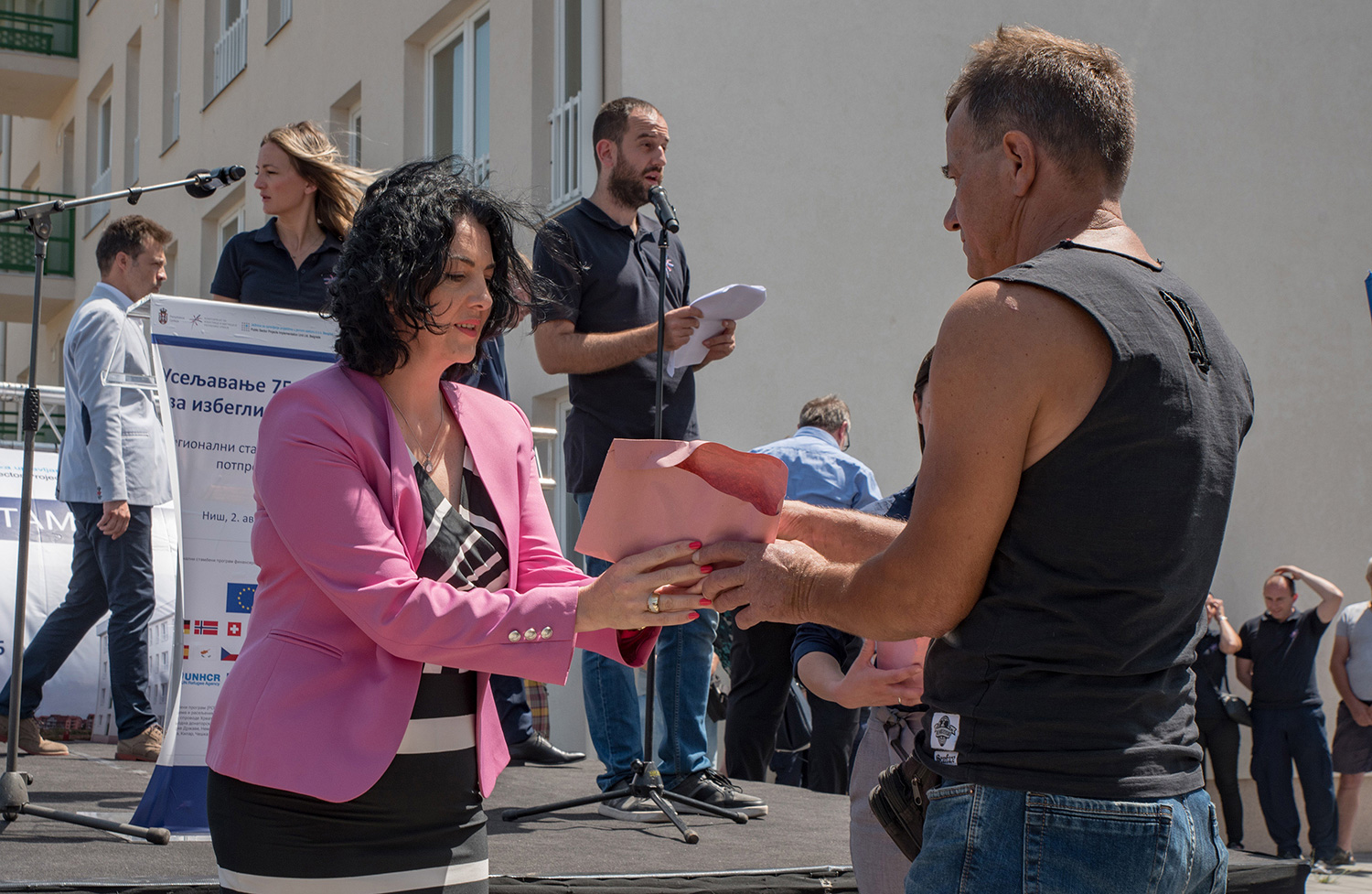 On behalf of the European Union, Mr Salzer observed that the EU had long been engaged in efforts in the region to provide housing for refugees following the conflicts in the former Yugoslavia, and would continue to support the RHP until the close of the Programme. He paid tribute to the Commissariat for Refugees and the city of Niš for their exceptional efforts, and thanked the beneficiaries in particular for their patience over the years. “This is an emotional occasion for all of us, but especially for you, who have waited for this moment for so long,” he said. “You have invested a lot of effort in rebuilding your lives, and we are happy to be able to contribute a little bit to that.” 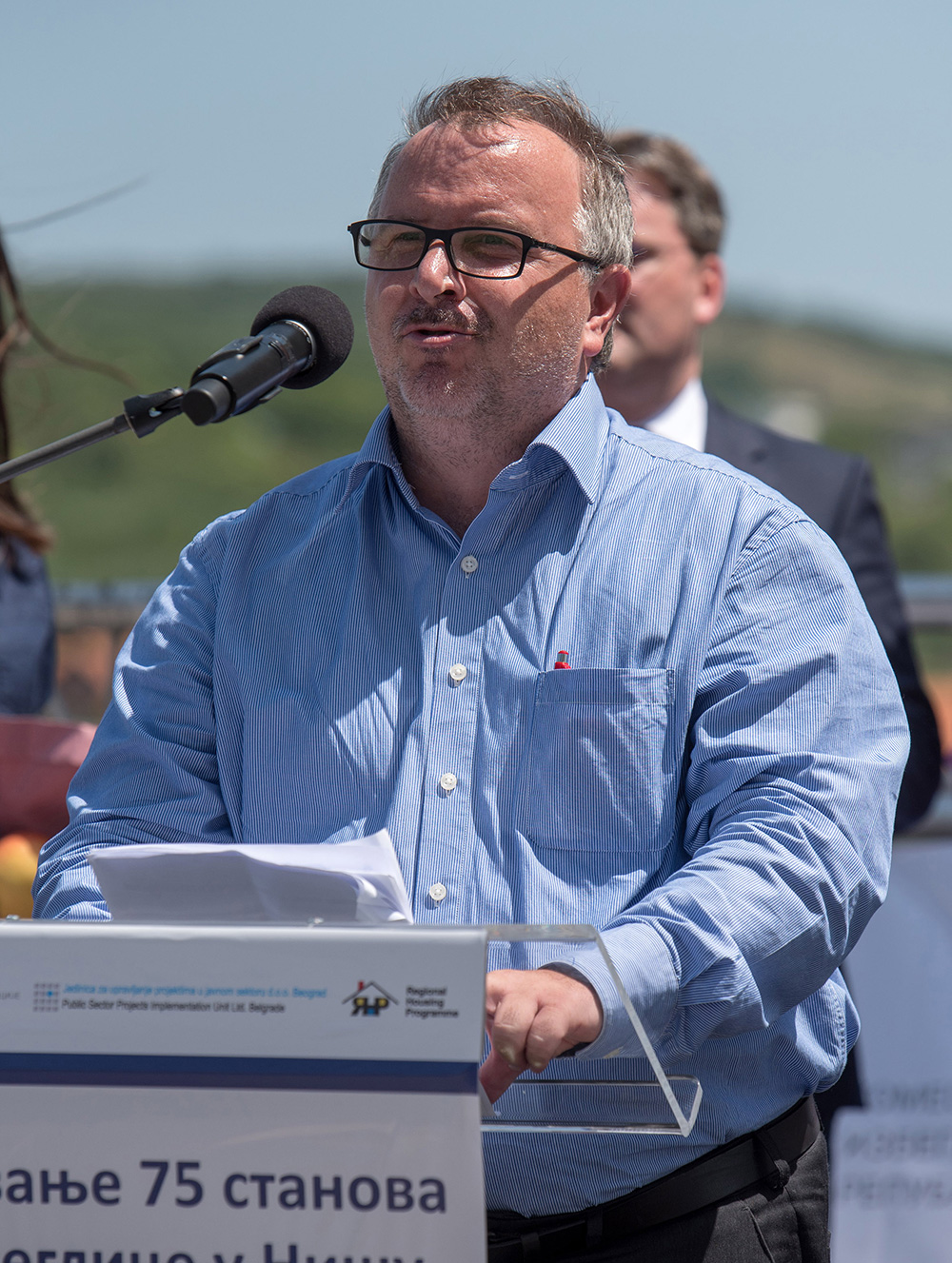 Mr Almehagen Sandstad agreed on the significance of the ceremony for those involved, noting that for Norway, as a bilateral Donor to the RHP, the event symbolised the “huge success” of the Programme. Congratulating the beneficiaries, he also applauded all stakeholders for their continued efforts and commitment to providing housing to the most-vulnerable refugees in the face of the challenges posed by the pandemic. “Despite this difficult period, the RHP continues to deliver,” he said. Together, we have managed to achieve important results and improve the quality of life of families.”

Speaking on behalf of the OSCE and its implementing partner, UNHCR, Ms Banda also commended the Government of the Republic of Serbia and the PIU for making great strides in the implementation of the RHP, noting that more than 5 800 homes had been delivered in Serbia to date. Stressing the importance of the RHP for the OSCE and UNHCR, she underlined the commitment of both organisations to the Programme until its successful completion.

Finally, representing the beneficiary families themselves, Gordana Stojanović, a single parent with two young children, explained that she had fled to Serbia during the conflict in former Yugoslavia. Her children had since completed their education in Niš, found employment, and started their own families. “The difficult years are finally behind us,” she said. “We have decided to leave the bad times behind us, and to only look to the future. Thanks to the RHP, we have a new, modern home where our family will finally settle down. On behalf of all of the beneficiary families here today, I would like to thank everyone who helped us.” 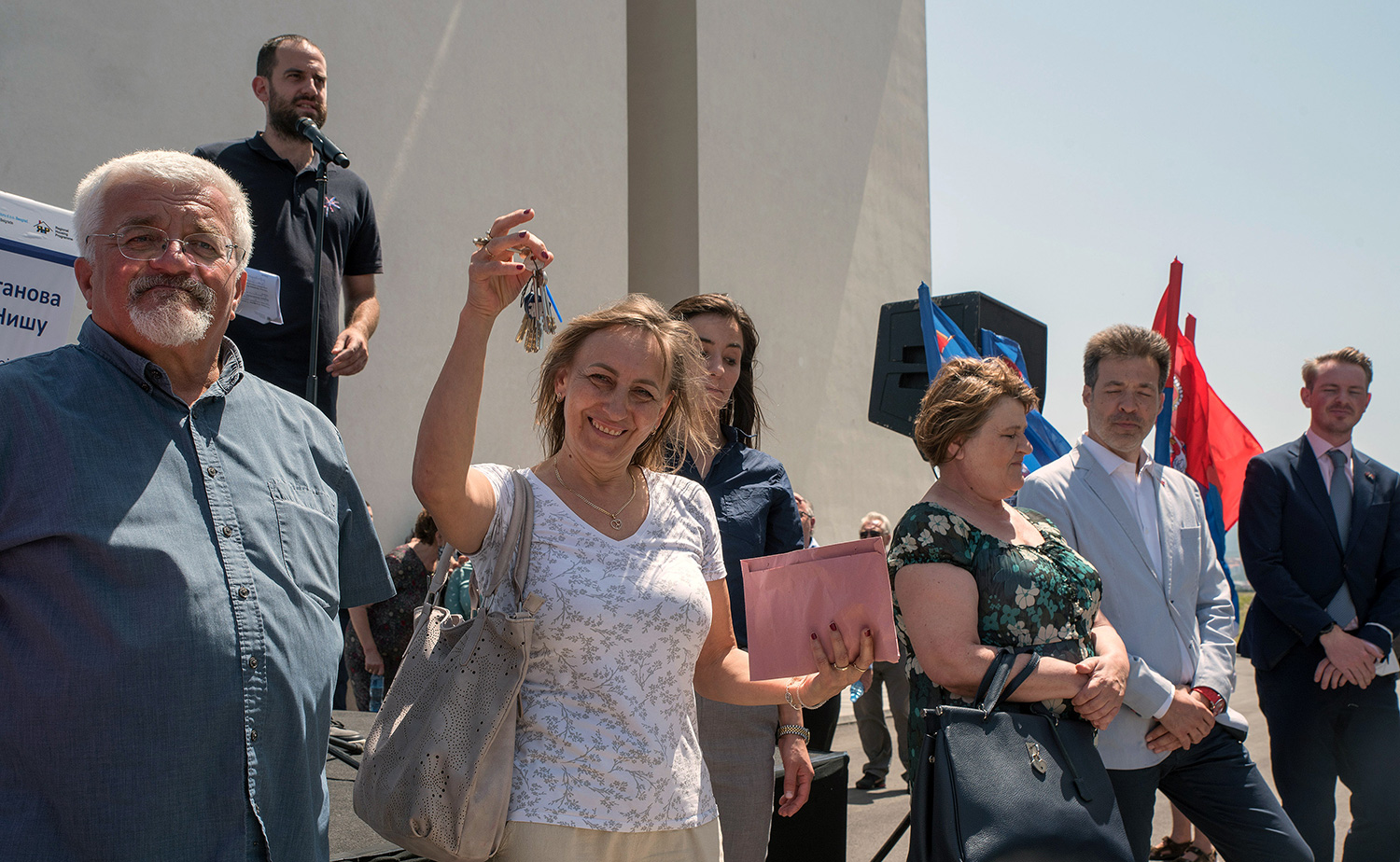